Cassandra & Brent: sneak peak (and another digression on colour)

Yesterday evening, I travelled with a Cassandra and Brent–a couple getting married in September–to Niagara and fruit and wine country there. In Toronto, in Kitchener, and everywhere around us, it was raining–but not in Twenty Valley!

We had a great time; they’re fantastic company and were very patient as I worked out some different photographic takes on local wineries and landmarks.

So this is just a little sneak peak at some of the engagement session photos we took at various locations in Jordan and Niagara on the lake. Lots more photos to come!

Interestingly, the light was almost omnidirectional with the way the cloud cover balanced over the open sky, but it made for some dramatic skies!

By the way, someone asked me why I think Canon’s 5d Mark 3 (my current SLR) has such great colour. You really need to see prints to for the full impact, but if you have a colour-managed browser you can also tell some wonderful things in the way the camera renders subtleties of reds and blues, and yet maintains fantastic skin tone consistency, even in low light with mixed natural and tungsten sources (which is generally a problem). Interestingly, both cameras here maintain excellent skin tones while seeing the surroundings a bit differently (and the lenses play a big role here too). 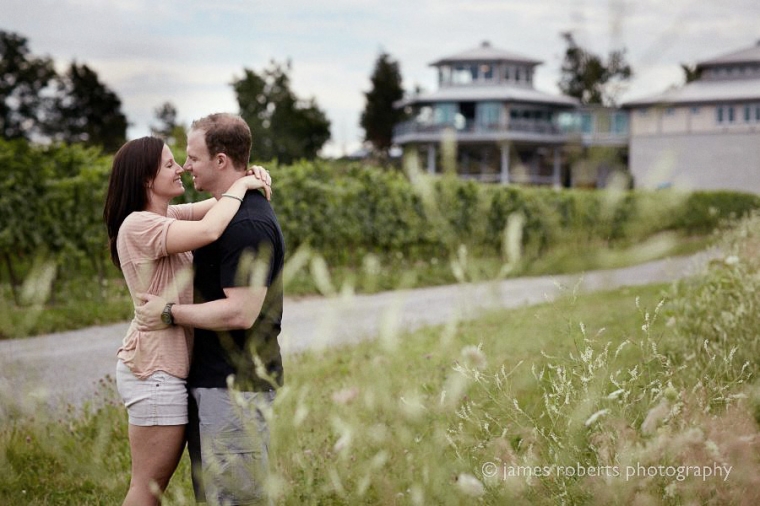 Next, some different light against the cloudy sky (Leica M9 with 28 Summicron Aspherical): 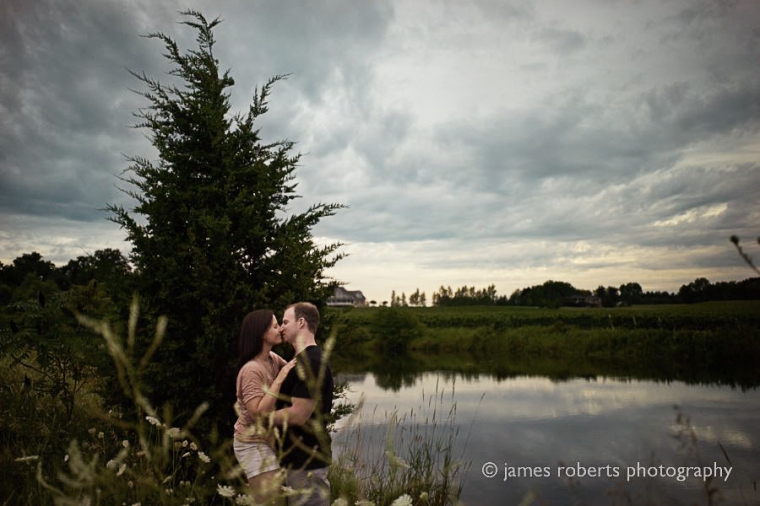 Next, in Niagara-on-the-Lake just after sunset (Canon 5d3): 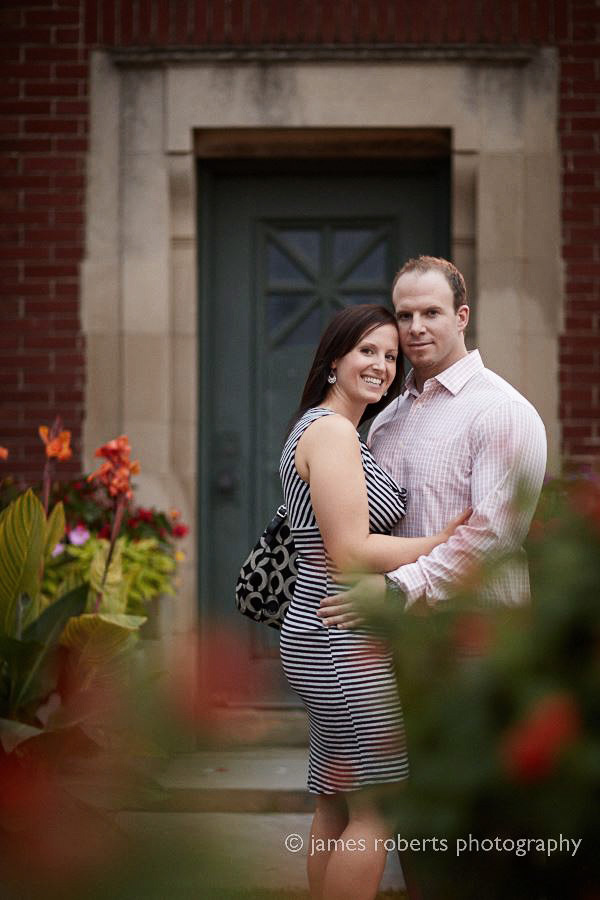 Yes, colour can be distracting. Yes, it sometimes confuses composition, and leads your eye where it should not go. Yes, it is often even looked “down” upon by photographers who love the intellectual abstraction that monochromatic images bring, to the point where some photojournalists give up on colour altogether.

But of course colour can provide glorious emphasis, focus and, in rare occasions, tell a story all by itself. Colours carry simple and actionable meanings (like the red in a stop sign) as well as many symbolic or even poetic meanings (think of the way we symbolize passionate love with red).

And of course we mostly see the world in colour.  Some of my favourite photos use colour gloriously in ways that emphasize that experience and don’t detract at all from the story.

When I process my images, they are in black and white unless there is a “colour story” to be told. Sometimes that’s just an eye colour; sometimes, a background that ties a composition together; sometimes, it’s a portrait with a wonderful colour “frame,” like this one.

For those interested, this was taken with an M9 and one of my favourite Canadian made lenses: the M75 1.4, shot under available tungsten light at the very end of a (great!) wedding.

I have lots of updates to make; it’s been busy! In addition to my usual musings about photography and showcasing some of the work I enjoy the most, I also want to report on using the Leica S2 as a “event camera” system. The S2 is a medium format autofocus camera from Leica, and they were kind enough to let me use it for a couple of my weddings last year. Why did it take so long for me to post? That’s another set of stories; all will be told, too 🙂

In the meantime, I leave you with this “getting ready” shot taken with the Leica S2 and a 70 mm f2.5 lens.

I don’t mention this too much, but I shoot both film and digital–each for their own purposes. The actual delivery medium doesn’t matter as much to me as the results, but each has its charms.

BW film, in particular, is a great way to get a certain kind of tonality quickly, so I use it to do that. Especially when I have time, like in a portrait or engagement session, I like to “go back” to shooting on film.

Can you achieve the same results with digital, too? Of course you can, but it helps if you know what film should look like to begin with, and to me that’s important.

But why? Why bother with “looking like film at all?”

Well, film is a mature medium, especially compared with digital, and a lot of time and effort went into detailing a system for capture, manipulation (in the darkroom) and print presentation. Most digital images, right out of the camera, fall far short of the range of tones and all-round excellence you can expect from the many kinds of film.

Believe it or not, we’re all pretty sophisticated when it comes to seeing beautiful images. So much work I see today is manipulated in post-processing to destroy detail (by crushing contrast) and delicacy of expression (by washing out tonality) that it’s refreshing to go back to the simple pleasures of film–and it continues to inspire me for my digital work too!

Oh–and here’s a couple of digital shot similar to the last one and from the same e-session (which got lost in my blog re-design!):

All of these were taken with a Leica Noctilux f1.0 lens, except for the wider angle shot of Jenn & Chris and the skyline, which was shot with the Leica 35 Summilux ASPH. Everything was shot on a Leica M6 (film) or M9 (digital).

Technology changes very quickly–but our appreciation of the impact of art stays the same, a lot of the time.

I just read the other day of another big change in the medium of photography. A company called Lytro (www.lytro.com) has announced a digital camera that records the entire “light-field” of a scene. This kind of camera, with help from sophisticated software, lets the photographer choose a focus point, among other things, after the picture has been taken!

Now, there are a number of limitations to the technology, not the least of which is that initial cameras will probably not offer much in the way of printable resolution–only 1mp or maybe a bit more is where these devices are going to start. I also have to say that so far, the effects I’ve seen with samples, while very interesting and encouraging, is somewhat limited in terms of spatial arrangement and emphasis, to say the least.

But even so, this is a real change in the way pictures will be taken, and a lot of Internet forums are buzzing with photographers who find this fascinating and those who find it downright scary! And regardless of the argument, the future is sure to bring more and more previously “un-thought-of” technologies to bear on the art of photography.

But some things don’t change at all: to successfully recreate the emotions of an event or create visual tension in a photograph, the photographer will still need to concentrate on three elements: light, moment, and overall composition.

Light and shadows shape the world we see, and is the primary way to tell a visual photographic story (even the word photography literally means “light-writing”). Light sets a mood,  isolates or connects things, and leads your eye into and around a picture. Shadows give us familiar faces and expressions and help make sense of our visual world. In classic photography, the amount of light through the lens is also associated with the ability of a photographer to use a lens to isolate focus and show you what’s most important in the picture.

Moment or gesture also makes a photograph interesting. As a medium, photography’s great strength is to play with time: to select a fraction of a second and show that moment as static, or to merge those fractions together to fuse moments into the fluidity of motion we often feel but never really see. In a more obvious way, moments that pass between people, or around them, are historical and can genuinely express a moment’s meaning or importance. Traditionally, a picture’s fluidity of time–including the ability to isolate a decisive or expressive moment–is associated with the photographer’s ability to select the right shutter timing to freeze or blur elements.

Because photography is a two dimensional art as well, composition also plays a huge a role in how we see what we see in a picture. The arrangement of all the elements in the frame helps draw your eye into the moment and should complement the light and gesture, so the story is told “in an instant.”

Put all three of these together–a command of light, the ability to capture a moment and show gesture, and a powerful composition–and you have a great, expressive photograph.

These are the things that my favourite photographs bring together, and it’s this union of expression and substance that I strive for with my wedding and portrait work.

Regardless of the technology that comes along, these things are not likely to change very much.